You are here: Home>Contributors>Dave Gibbings>Dave Gibbings is a former Chief Flight Test Engineer at Westland and remembers working on the Lynx Helicopter at the start of his career 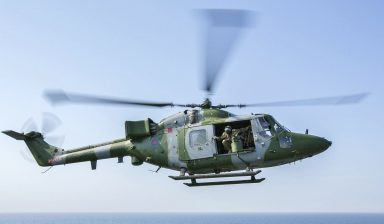 The Navy Lynx and the Army Lynx offered a more or less identical solution to look at, which was slightly different, because the Navy Lynx’s main job was attacking fast patrol boats on the surface of the water. Even that came about in a sudden swoop. The Egyptians took out an Israeli Destroyer with fast patrol boats and it was unheard of that a small nation with little or no resources could operate one of these patrol boats and get close-in enough to sink a capital warship, and they did, and it really set them on their heels and that changed the whole requirement for the Lynx by a long way and it got into service quite rapidly. I mean, we started working on it in 1967 and it flew in ‘71 and was in service by ‘79. I personally have my doubt that we could do that now. It was a fascinating project to get involved in because we were doing it from scratch.

We developed the airframe in 3/4 years

It was going to be a great helicopter. It had terrific enhancement of its deck landing capability, had this rigid-rotor which made it incredibly manoeuvrable. You know, we developed the airframe in 3 years, 4 years. You know, it was a very adaptable aircraft and we saw it as an anti-submarine, dunking sonar aircraft, as a troop transport. It was quite capable of civil operations but it would be a bit expensive. It had a thing called a rigid rotor. Now, helicopter rotors have hinges, that make the blades flap up and down and lag forward and back and they can feather. With these hinges the control power was much lower. Once you made it with bending moments, so that the rotor just bent at the root to give it the control movement, you could get quite a lot of control power into it and you could make the aircraft incredibly manoeuvrable. It was so rigid in lag and flap, and the only hinge in the whole thing was a feathering hinge to make the blades come up at an angle, and with that configuration it was incredibly sharp.

The helicopters usability was getting more and more

With the Navy and the RAF you have got various requirements. The Navy got the small ship requirement. It needed the anti-surface vessel requirement with it. It’s got the Commando carrying job, which means operating from a forward airbase somewhere that you have fixed-up, and just to use the one aircraft to go and look at something. The Army needed an aircraft for the battlefield and they wanted an anti-tank capability. The Navy wanted a troop transport for the Marines, the Royal Marines, I should say. The RAF wanted something similar, so the helicopters usability was getting more and more. Search and rescue, and that brings-up a sore point, because search and rescue is now almost entirely civil, and I have always believed that search and rescue was very much a military exercise. If only because it’s one of the few things in peacetime where you take a serving officer and you put him in a situation of making life and death decisions and that is what the military is all about.