You are here: Home>Contributors>Dave Gibbings>Dave Gibbings is a former Chief Flight Test Engineer at Westland and recalls how well the Yeovil factory responded to the Falklands War in 1982 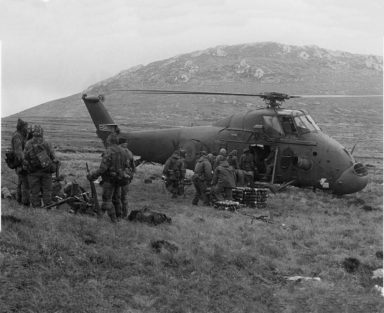 The British deployed 200 helicopters to the Falklands War and all were built by Westland. Dave Gibbings recalls workers at the Yeovil factory working ’round the clock’ as the crisis in the South Atlantic unfolded

The Falklands took us by surprise. We had to get the task force down to the South Atlantic. We just threw the stuff on board the ships as soon they became available. All the way down towards the Falklands helicopters we were replenishing from one ship to another. We were shuffling all the cargos about and by the time we got to the Falklands the ships were equipped with the right stuff in the right place. Now, it took 200 helicopters to do that and virtually all of them, apart from a few Chinooks, were made at Yeovil. It was certainly the biggest role that Westlands had played in doing anything. Nothing was too good for the forces. I think Westlands responded extremely well and on the armaments side in particular.

It showed we could do it and we did it well

The ships started getting sunk by Exocet. We, at Westland, had fitted Exocet under the Sea king and our armaments’ people helped considerably in counter-measures and what was involved. One other thing was AEW, early warning. We had done it with the Gannet in 1980 and I suppose it was ’75 – ’80 that the Gannet was withdrawn from service and the radar was put into the Shackleton. The RAF had made the claim they could cover 95% of the World. But the one place they couldn’t cover was the Falklands. We fitted radar onto the Sea King and we did it in 2 or 3 months, at the most. You know it takes anything from 5 – 10 years to develop a new model of aircraft and it shows it can be done, and it was done by dispensing with a lot of the red tape. It’s a bit unfair to get too critical about that because the red tape’s there with past experience where some disaster has come about by ignoring it. But it showed we could do it and we did it well.