You are here: Home>Contributors>Dave Gibbings>Dave Gibbings is a former Chief Flight Test Engineer at Westland and remembers when work started building the Apache AH-64 Longbow helicopter 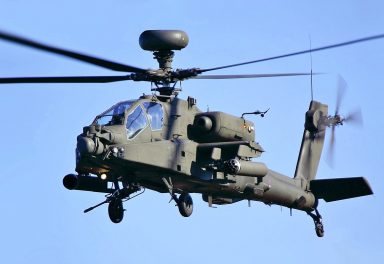 Dave Gibbings describes the Apache AH-64 Longbow helicopter as a ‘nasty piece of work’. He says its introduction has fundamentally changed the role of the military helicopter

The helicopter itself has turned into a nasty piece of work of course with the Apache. It carries more armament than a Harrier. It’s got guns and radar, all the things that can find things, tell you where they are, whether they are hostile or not, whether to shoot at them or not. It’s got identity things such that you can read a tank commander’s name off his chest from about a mile and decide whether to shoot him or not. It’s a formidable aircraft. This is an interesting side to procurement. You often get governments accused of not buying the right things but when they went in for the Merlin; the Apache, Russian submarines were coming-out of Murmansk and Russian tanks coming across the German plains. When the Berlin Wall came down all that need went away. While we were actually designing it and it was ordered, Saddam Hussain was our ally and Bosnia and Yugoslavia existed as cohesive nations, so everything changed in that time. The aircraft coming into service now have no clear anti-submarine enemy, although we have got to be capable of doing it because the threat comes from submarines. The Apache is chasing a lone Taliban with a Kalashnikov. This is quite an expensive way of chasing him.