You are here: Home>Topics>My working day>Norman Pilton worked in transmission at Westland and remembers the Progress Chaser 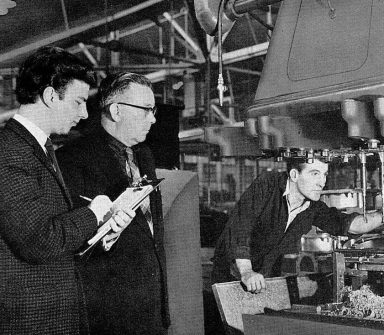 He used to chase-up all the various jobs all about the works. He would keep the flow of work going all through because it would go to whatever, the anodic or tool room or tin bashers. They would all have to get work up together and they would be chasing them up all the time, they would be chasing you to get your job done. As I say, Reggie, he would go down and the bloke would say 50 off to build or whatever and make. Reg would go down and split his card to get that 10 or 8 or whatever it might be so he could keep you going. But you never seemed to get that from any of the other progress chasers.

Another progress chaser we used to have, I can’t think of his name for the minute, but he used to be a bookie’s runner for Mike Loveless, the bookie in town and that’s all he ever did. He used to go around throughout the whole of the works, bosses and all, and he’d take their bets, and he’d get it all down to Mike Loveless. He never did anything else but then all the bosses all turned a blind eye because, the thing was, if he hadn’t done that, there were all the blokes for everlasting going on the phone ringing up Mike Loveless or, whoever it might be to place their bets, and it was time that was being lost, all the time, with all these phone calls being made placing bets. So, he was a progress chaser as such but the only chasing he did was chasing the bets for everyone for Mike Loveless.