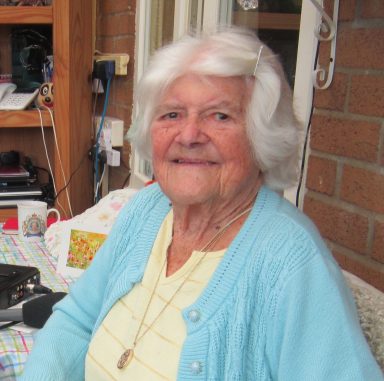 Mini Ostler was 103 yrs old when she recorded this interview

She began working at the Yeovil factory in 1930 but left to start a family shortly after. Mini then volunteered to re-join Westland following the outbreak of WW2 and worked in the Fitting Shop

Mini – I went back to the fitting shop. I don’t know how long I stayed there, not long, because I had a little’un then, I had Megan. My mum looked after Megan while I went to work. They classed gloving as a luxury trade. My husband was gone on in the war. You’ve got to do something else gal if you aren’t going to get any gloving. What are you going to live on? Alec’s in the army and that’s sod all, the army pay, those days. So, I thought, volunteer back to Westlands. And, then my sister-in-law, Blodwyn, came up from Okehampton. She was in the shop. She had to do either Land Army or join the ATS or something so I said “come on up and go to Westlands” which she did. She got a job there and she worked in the wing department help making canvas for the aeroplanes. That was during the war. Don’t ask me what the year was.

Daughter (Millie) – what did you do then mum when you went back?

Mini – Well, I was in the fitting shop. We did a lot of Lysander parts that came in that had been shot down. I suppose other parts of the works did help repair them. Then you had de-burring you could do, oh lots of ….

Daughter (Millie) – didn’t you do wings again for the Wapiti?

Mini – Oh, that was when I was there first.

Daughter (Millie) – but in the second time down there you were doing in the fitting shop again, drilling that sort of thing, didn’t you?

Mini – I don’t think I did any drilling actually but you had a lot of de-burring to do and different things that we were told to do.

Daughter – yes, but we don’t know what that was mum because I’m not old enough to remember all that so what was the de-burring about?

Mini – Well, de-burring you had a file to file off all the rough edges off the metal. You don’t know what de-burring means?

Mini – Well, you know now, if you’ve taken it in. Some of the things I was only told once but I took it in and remembered it.

Daughter – well I’ve taken it in now. I know what de-burring is – it’s filing.

Mini – Well, you were in the factory, like you would be the same as today, I suppose

Daughter – Yes, but was it hard, hard for you to work in there? Were they nice to you or were they nasty to you because you were women?

Mini – No, they were never nasty to me because I was always pleasant

Mini – Didn’t ever worry me. Some girls didn’t like it. Blodwyn didn’t like it as well as I did. I used to say to her well we’ve got to get up and go to earn the money

Daughter – Auntie Blodwyn is a little bit different than you

Mini – But she was in the wing shop. I didn’t ever go in there to work because there were all different jobs like it is today. I haven’t been down there for years now but there was a time when I could walk round Westlands and tell you what all the shops were.

My working day, Women in the workplace, How I did my job, World War 11: wartime production, Mini Ostler,