You are here: Home>Topics>My working day>June Coleman was Manager of the Travel Department at Westland and remembers her first day working at the Yeovil factory 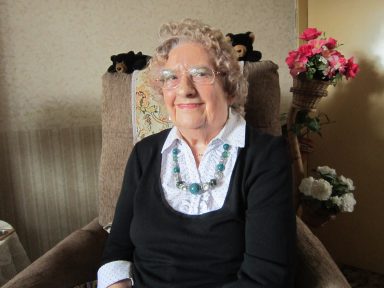 Computers were not in use when June Coleman began her job booking oversea’s travel and accommodation for Westland staff. Even when she had a computer, she preferred to use travel books and brochures to find the best flights and hotels. June remembers starting work in the Sales Department in 1978.

It was a really big office, sales office, with sales reps in, really quite a nice family concern. You know Richard Case was, I think he was the MD then, he might have been, but he was magic. He would speak to you, he would look after everybody.

Interviewer: You say there were no computers so describe what your desk was like?

Oh well, there were these, they were called ABC books, and they were huge books and you would look up London to Dubai or wherever and there were all the things, like printed, nothing on the computer at all.

Interviewer: So, if someone wanted to go to this part of the world, this city or wherever, you’d look it up in a book to find out about that place?

You would look from London to, oh I don’t know, anywhere, Marseilles or anywhere and then the actual flights and that would be BA or Air France or anything like that and then you would see what days they fly and what times they fly – magic, magic.

Interviewer: And you made all those arrangements by telephone calls, or how did you …

Yes, before American Express came on the scene we used Bath Travel in Yeovil and we used John Plank Travel in Bournemouth and occasionally we’d try somebody else. We had good deals with Alitalia and that, and I did get a lot of perks I must say.

Interviewer: What sort of, what do you mean by that?

Well, you don’t get anything like that now but you would get, say, the Varig say, rep come in and he would say you do trips to Rio now but you always use British Airways, why do you always use British Airways? And, I said, well, you know, because they’re excellent and he said you don’t know anything about Varig and I’d say no, I don’t know anything about Varig, and so I ended up going to Rio twice. But it was good PR.

Interviewer: Were they a travel company?

They’re the airline for Brazil, Varig, and then I would put some people through Varig airlines because I knew they were as good as British Airways and cheaper, you see, so I did have quite a bit of sway, really.

My working day, June Coleman, Women in the workplace, How I did my job,