You are here: Home>Topics>Petter family>When orders for aircraft were flat, Westland would make other products to help balance the books. Joseph Lewis, Heritage Co-ordinator at the South Somerset Community Access Heritage Centre in Yeovil recalls that Pianola's and an early type of adding machines were some of the many inventions made by Westland

When orders for aircraft were flat, Westland would make other products to help balance the books. Joseph Lewis, Heritage Co-ordinator at the South Somerset Community Access Heritage Centre in Yeovil recalls that Pianola's and an early type of adding machines were some of the many inventions made by Westland 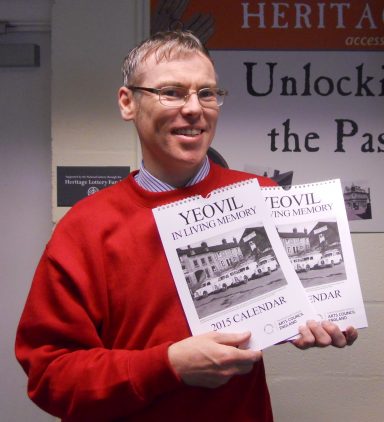 An early type of adding machine invented by Petters 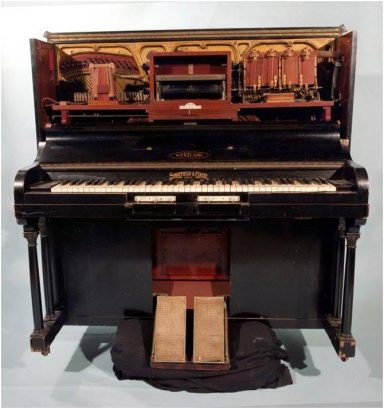 Our story starts around the 1880’s when James Bazeley Petter was given an ironmongery business as a wedding present and we’ve got pictures showing in the Borough the oil and colour and engine merchant, more or less where Superdrug is now, opposite the War Memorial and then there is a cast iron bollard in Waterloo Lane which says Petter & Edgar, Iron foundry, marking the point where another early foundry was and some of the early products from there, one of which is a cheese press or double cheese press which we have here and significantly it has the name Petter on but it also has the name Edgar which may be slightly less familiar and that was James Bazeley Petter’s early business partner and they made in the foundry the cheese press, doors for ovens, bread ovens which were some of the very popular products that they made. They also made, which really got the Petter name going, was the Nautilus grate, an early form of circulating heat radiator, cast iron.

In his autobiography, his daughter says that he was looking at a coal scuttle one day and that gave him the idea for this Nautilus grate and I suppose what’s great about it was that Queen Victoria had them installed in Osborne House on the Isle of Wight so if it’s good enough for Queen Victoria, it’s good enough for the people who could afford it, families of Yeovil and there were three types, I believe the Study, the Boudoir which we don’t use very often and probably more the Lounge that we would call it now and we’ve got an illustration of that.

What would come next was that James Bazeley Petter and his wife Charlotte had fifteen children, so a large family even for those days and three of the children are significant: Ernest and Percival, who are the twins, and then Guy Petter who was their older brother by about a year, we understand. Ernest and Percival were very much into Boys Own papers and there was a design for an engine in there which they thought they could make and their father helped them out by giving them a lot of money at that stage to look into car manufacture. From this Boys Own paper around 1894/1895 Petters then employed one of the old school engineers, as Percival Petter calls him in his autobiography, Ben Jacobs, who worked for an engineering company, Sibleys at Martock and helped to adapt this design of engine for the horseless carriage from the Boys Own paper into an oil-powered engine of about two and a half horsepower to power the horseless carriage and then Hill & Bowl, the carriage builders, coach builders, built the coachwork for it. They were based in Yeovil and Sherborne and he also records, Percival Petter, that they drove it to Montacute House when Montacute House had an Open Day and they would charge a small fee to drive this horseless carriage around and take people round on this very novel invention.

They later developed, in about 1898, a carriage which had two electric motors powering the front wheels but they were saying that the brakes weren’t very good on it and there was this order for a German company who said sort out the brakes and Percival Petter records that they said well we’ll drop the price for you but the deal fell through so that was a very great shame to the Petters so the course for Petters may have gone very differently, but then the car manufacture stopped.

We should also note that on the cheese press there was Petter & Edgar and the course of Petters again may have gone very differently because Mr Edgar sadly died in a carriage accident. The horse reared up that he was with, this was a conventional carriage of course, and he was killed in Princes Street which Louisa Harris, who wrote a diary in between 1887/1920, records this happening so, again, the course of Petters may have gone very differently.

After the First World War, they still had a lot of aircraft production keeping them going, particularly the De Haviland DH9 and DH9a which they were making under licence which was keeping them going very much but they still looked into other markets and we have two other products here which emphasize that theme of diversification.

The first one being the Pianola which we have there and sources record that they made many pianos but I think we have a distinction in that we have got possibly, our records record it, of being the only Pianola that Westland ever made and significantly when you lift the lid, it says Petters Ltd and then also Westland as well so it clearly dates from that, either just during the First World War or just after and also as well our records record that there is a label for Swaffield & Foot in there as well and to people of a certain generation would remember that as one of the piano dealers and sheet music sellers in Yeovil, so an interesting link between Petters and a name from Yeovil.

The second diversification type object we have, much smaller than the Pianola, is a pettometer or comptometer as many people might know it, an early form of calculator, so Petters were looking into office equipment and there’s some debate, some sources say it was developed by Percival, some say it was developed by his older brother, Guy, for many years but certainly they took out patents for this adding machine between 1923 and 1930 and ours probably dates from around that 1930 to 1932 period. It looks like an early form of Bakelite type material and adds from numbers one to five. You need to press two numbers down to get numbers higher than five and then what’s useful for us is that we’ve got a pettometer, that Petters made, with Petters patent on and then after that just behind it and only recently donated was the adding machine that they sold under licence to the Bell Punch company in America so we’ve got two examples: pettometer and the example they made under licence or sold under licence, to the Bell Punch Company, so those are just a few of the other objects that we’ve got that Petters and Westlands made.

How important to the company’s survival, financially, were these products that they were producing different to making aircraft?

Well, certainly, the pianos is an interesting example because relatively few were made so perhaps they developed those just as an off-shoot before things, particularly like the Lysander, came in which saw use for the Special Operations Executive, so it seems to be a stop gap between those two products and particularly as we’ve only got what’s said to be the only one, that would say limited numbers were made. But certainly the pettometer saw some success, limited numbers made by Petters but much more by the Bell Punch Company and they even produced advertisements for them.

Petter also recorded in his autobiography, the only motorcycle they made, really stemming back from the horseless carriage engine. Ben Jacobs really should have the credit for that. The development of that, they took the vaporiser off and really that developed into the Handyman agricultural stationary engines which people may be less familiar with because we think of Yeovil as helicopters but they were still making stationary engines in Yeovil up to about ‘38/1939 before the outbreak of the Second World War.

Sources also record that Percival, looking after that side of the manufacturing, and Ernest looking after the aircraft side then joining up with Lister Petter in about 1939 to make the stationary engine side continuing, but the key thing, that engine with the horseless carriage taking the vaporiser off, we also understand formed the basis of this motorcycle which Percival Petter records as being possibly the first motorcycle in this country.

The other product that Petters made, in collaboration with Seaton, Douglas Seaton car dealer many people remember being on the corner of Clarence Street, was the Seaton Petter car. Now, Seaton provided the bodywork as Hill & Bowl did with the horseless carriage, and Petter the engine and, as far as we know, this looked much more like a conventional car but as with the horseless carriage, people often said “Oh, how you getting on with that?” and he said “We’re pushing it again” and he said, you often are!

What happened with the Seaton Petter car, there were two interesting things about it: one it was advertised as the first £100 car which was interesting but by the time you added certain extras it pushed it up over that £100 which was interesting so we would think of the Misdiscriptions Act now in terms of advertising but also there are stories of it saying it got stuck in reverse which wasn’t very helpful so, those are the other two things about it and, of course, they formed the British Dominion Car Company so you can see where Petters were going there in terms of the grandure of how it was to be marketed.

There were also brochures produced what looked like showing the simplicity of the design and I have to be careful what I say because a lady is shown operating the car and going over rather rough terrain which looks like Ham Hill and where we have 60/40 split rear seats in certain cars now, which are the norm, there are pictures of the lady taking the seats out to adapt it or fold it down to give you more loading space.

So, that was the Seaton Petter car in about the 1930’s but, as we say, as far as we know, the only evidence we have are those brochures and no actual surviving evidence of it.