You are here: Home>Topics>My first day>Paul Murley joined Westland in 1945 as an Apprentice Engineer aged 15 yrs and rose to the position of Engineering Services Manager completing 44 yrs service. He remembers being taken by his father to the Yeovil factory for his job interview

Paul Murley joined Westland in 1945 as an Apprentice Engineer aged 15 yrs and rose to the position of Engineering Services Manager completing 44 yrs service. He remembers being taken by his father to the Yeovil factory for his job interview 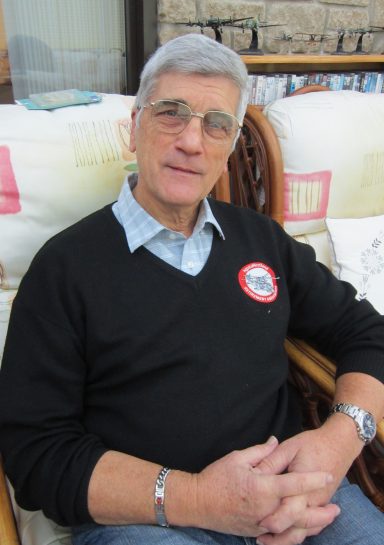 Everything seemed to be built round family. It was family. I remember Stan Lobb. He said to me, I understand Paul that you have relations here? I said, yes, Uncle Harry’s here, Uncle Jock’s here, my cousin Mike’s here. How they looked at that was that they always felt the family would keep their eye on the family. So, Mr Lobb wouldn’t be worried about Paul because the family would be worrying about Paul. Uncle Harry worked there, God bless him. Uncle Harry worked in the sheet metal department and Uncle Harry could, with special machinery, rolling machines, take a piece of flat sheet and make that sheet curve into the shape of an aircraft body. They would go there for hours, backwards and forwards, backwards and forwards, but what an eye, what a talent. I remember Uncle Harry was such a good engineer that Mr Pemberton – Bill Pemberton – was the foreman of the shop, bless him. He used to come down to Uncle Harry and he would throw a piece of paper on the table, which would have a sketch on it and he’d say: Harry, have a look at that for me. That’s how engineering was done in those days because the men were so good. I remember all those sorts of things. I remember going out on to the airfield – you’d walk past a Whirlwind that was about to take off or about to start its engines. The old Whirlwinds had piston engines so if you weren’t on the ball and you happened to be walking by the engine was started by a cartridge. Dear Lord, the times I used to drop my sandwiches out of my bag, just the sheer fright of it. But wonderful, wonderful times.