You are here: Home>Topics>Aircraft types>David Angulo was a Management Accountant at Westland and worked on the contract to build helicopters for the President of the United States of America 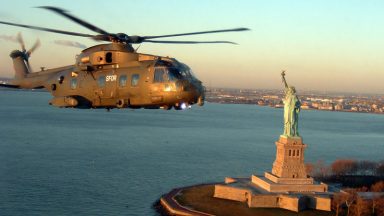 The 101 is a good aircraft. I’m bound to say that but everyone in Yeovil would agree. The 101’s a great aircraft and the American’s plumped for it. But I’m sure there must have been a lot of anti feeling in Congress and certainly the ordinary people that why buy new aircraft for the President in England when you’ve got McDonald Douglas, you’ve got Boeing, you’ve got a huge amount of factories that are so huge their worth is many, many times that of Westland. But anyway, they were ordering 101s as a shell but then all the fittings inside they were not ordinary at all. It had all sorts of extra gizmos because it was presidential.

We had skittle night and the Americans won!

Every time that somebody would visit they would say, look we want that changed, we want that changed and so the thing was proceeding quite slowly. Pivotal team people, because they did the shifts with us, they did earlies and lates exactly like us and the night shift, and we entertained some of them. It was quite good really. We had social dos with them. You will love this story because we had a skittle night out at Norton-sub-Hamdon, the pub out there. We had skittle night and the Americans won! It was quite humiliating.

They fly around in aircraft which are frankly too old