You are here: Home>Contributors>Ian Penrose>Harald Penrose was Westland Chief Test Pilot from 1932 to '53. His son, Ian Penrose, recalls his father's role in the development of the Wyvern and the first helicopter built at the Yeovil factory the Dragonfly

Harald Penrose was Westland Chief Test Pilot from 1932 to '53. His son, Ian Penrose, recalls his father's role in the development of the Wyvern and the first helicopter built at the Yeovil factory the Dragonfly 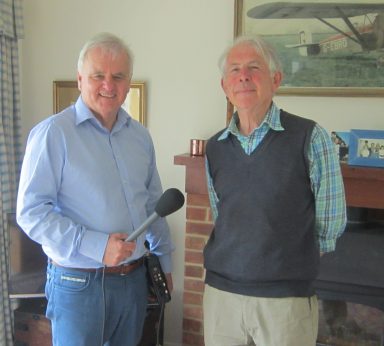 The Wyvern was clearly an enormous strain on the finances of Westland and it went on for, I think, eight long years but they, therefore, talked about diversification and the helicopter came up and I know that Pa went down as early I think as forty-six, seven to Beaulieu where there was an assessment going on at the helicopter investigatory works, somewhere near Beaulieu and, after a fair amount of discussion between all the Directors and I presume, the pilots, they did manage to get the licence to build, from Mr Sikorsky, the Westland S51 which they then christened the Dragonfly and that was then the sole helicopter which gained a lot of publicity and, you know, even though Alan Bristow did clock one of the Directors and, I really have never found out why, Alan has to be thanked because it was he, who as the chief test pilot for helicopters, did so much publicity. I mean he, during the gales of the early fifties, fed the lighthouse keepers very famously at the Wolf Rock Lighthouse with their supplies. He helped bring the helicopter forward and they very quickly produced a prettier version of the S51 which was amusingly called the Widgeon and which Pa always told me he had been sketched on the back of an envelope; a prettier nose. So, whether he had anything to do with the Widgeon, I wonder?

And then, of course, they brought out their lifesaver which was the S55 which was the funny looking, little, fat job which kept going until twenty-something years ago, maybe? I mean it was a really, really useful machine, that one and it went through various permutations and, of course, they did collect other machines with their acquisitions.

They made a thing called the Westminster, which was called the flying crane, I remember, which could pick up a tank but that never went into production. I think there was a certain amount of difficulty. I know the Westlands directors were very tickled with the Fairey Rotodyne.

There was the hovercraft. Pa was very sceptical about it and said it would turn over and it did turn over and I know he had an awful lot of fusses with the directors and I think, you know, to give him his due, he didn’t exactly say look, I’m a Naval architect and I can work a slide rule and I know a little bit more about these things than maybe some of the people in the aircraft industry.

Yes, I think Westlands were forced to go at a certain pace.